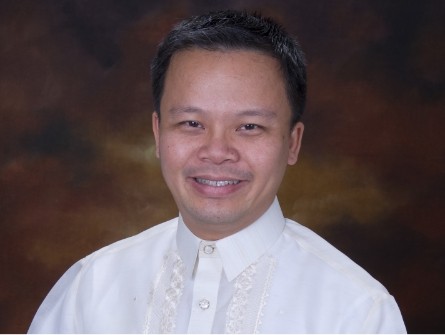 A Xavier Awardee from the Xavier School Class 1989.
A renowned academician, he began his career in the academe as a Conversational Mandarin High School Teacher in Sacred Heart School (Ateneo de Cebu), Cebu City for 2 years.
Lecturer and Officer-in-Charge of the Chinese Studies Program, as Associate Director of the Confucius Institute and as Associate Director and Director of the Ricardo Leong Center for Chinese Studies at Ateneo de Manila University for 8 years.
BS Management-Honors degree at the Ateneo de Manila University
Master of Arts Degree in Philosophy and Theological Studies, Ateneo de Manila University
Masters Degree in Buddhist Studies from the University of Hong Kong
Awarded the Doctor of Philosophy degree in Study of Religions, for his dissertation on Chinese Buddhism in the Philippines, by the University of London’s School of Oriental and African Studies in July 2013.

He earned a BS Management-Honors degree at the Ateneo de Manila University, before entering the Society of Jesus in 1993. After priestly ordination in 2004, he became Director of Jesuit Communications. From 2004-2008, he also served as the National Secretary for the CBCP Chinese-Filipino Apostolate. At present, he Chairs the Chinese-Filipino Apostolate cluster for the Philippine Province of the Society of Jesus.


In 2017, Fr. Dy finished his Jesuit tertianship program, which is the final formal period of formation among Jesuits. He is the representative of Jesuit Basic Education Commissions of the Philippine province in Jesuit Conference of Asia-Pacific (JCAP). He is also spearheading Fr. Pierre Tritz Institute - ERDA Tech, a technical and vocational school adopted by Xavier School.

Fr. Dy is author and editor of numerous publications.